I just got back from SciFoo (Science camp for Friends Of O‘Reilly) held at Google headquarters in Mountain View, California. It was an invite-only for 200 scientists, thinkers, writers and geeks to get together and brainstorm. It started on Friday evening when we were dropped off at the Googleplex and followed the yellow brick road to registration (Yes it really was yellow brick).

We were photographed, asked to say 5 things about ourselves and then nominate 3 others for the meeting next year. Then we just ate and introduced ourselves to the otherwise strange faces around us. Not that all were strangers. If you are the founder of O’Reilly Media (Tim O’Reilly) or co-founder of Google and worth billions (Larry Page) or one of the few psychologists ever to be awarded a Nobel Prize (Daniel Kahneman) or simply that annoying science guy (Bill Nye), then you were off to a good recognition start. Bjork was supposed to be there but once again, she dissed me and did not make an appearance. (This is the last chance I give her!).

The rest of us just milled about until we had the introduction from Larry Page about what the meeting was about and the etiquette of photographing Google headquarters and delegates. Then it was a free-for-all as we all rushed forward to sign up to give talks in a frenzied squash. Some of the talks were grim and surprisingly dull whereas others were really quite impressive. I even bumped into some old faces and heard the latest from Devi Patel and his study of the amazing dancing Cockatoo, “Snowball.” Devi has a paper in Current Biology where he shows that Snowball can adjust his dancing to different tempos and even “mash” it up when the beat gets too fast. Check this out –

Meanwhile my presentation went fine but the main plus for me was when Anne Triesman and Daniel Kahneman complimented me. Daniel said my talk was “fun.” 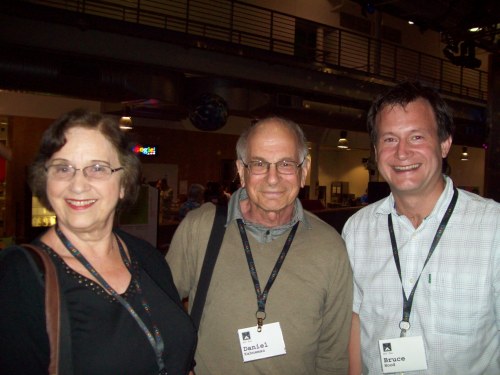 Hoping that some genius will rub off on me!

I’ll take that in the best possible way.

Filed under General Thoughts, In the News, Research