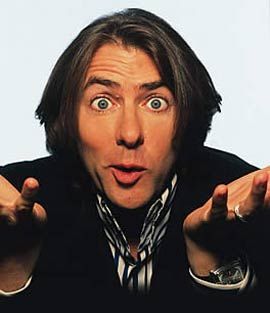 “Yes it’s him. Be cool. Relax. Don’t stare. He is just another human being. But it’s him … Jonathan Bloody Ross!”I became a real fan of Britain’s top TV interviewer and radio host when he took over from Barry Norman’s film review show. I thought no one could replace Barry but ‘Wossy’ surpassed the great Barry – or maybe not (inside Barry joke!).

So here I was in the green room at The Amazing Meeting event in London this weekend mixing with the speakers. Tracy King, the organizer had invited me to give a satellite talk but asked that I be on stand-by should the Skype link to James Randi not work. I jumped at the opportunity to do my thing to fill the slot. Luckily for everyone concerned the link to Randi went fine. All the speakers were superstars and I think a last minute entry would have looked just like that.

Anyway back to Jonathan Ross. I knew he was at the meeting but never thought that I would be mingling in this group. I was about to pick up the plate to self-serve the lunch laid on when Wossy entered the room. My heart skipped a beat. “Get a grip man! Reign those emotions in with reason” But then Wossy spots me and walks over, clamping an arm around my shoulder and forcing a handshake.“Great to see you, sorry I won’t be able to make your show tonight.”

I freeze like a rabbit caught in the headlights and transfixed by his famous smile. Is this a windup? An elaborate hoax to tease the poor professor? Have I been set up? I’m shaking Jonathan Bloody Ross’s hand. My mouth goes dry.

A few more exchanges of small talk and we both proceed to fill our plates. But my hands are shaking and every time I try to balance a piece of quiche on the fork it drops pitifully. I quickly exit the serving table to seek refuge. I sit at one of the tables trying to look as nonchalant as possible but I know that I must look white, and I can feel the beads of sweat streaming down my face.

It took some time for my autonomic arousal system to return to some semblance of normality. How many famous hands have Wossy’s hands touched? What essences have exchanged in those handshakes. Connected by 7 degrees of separation just got shortened by miles.

Over the rest of the day we chatted again (about killer’s clothing and stigmatized houses). I am  sure I rambled but at least I didn’t look like a sweating ghost – I hope. His daughter later told me that “Dad’s vision isn’t so great,” but actually over the course of the weekend I would be mistaken again for Robin Ince another five times. One delegate actually got annoyed with me for not accepting his compliment! “If you are not Robin Ince, then who the hell are you?”

When I finally did meet Robin Ince, I went straight up to him and introduced myself, “Hi, I’m Robin Ince!”

Filed under General Thoughts, In the News