Ariane Does it Again 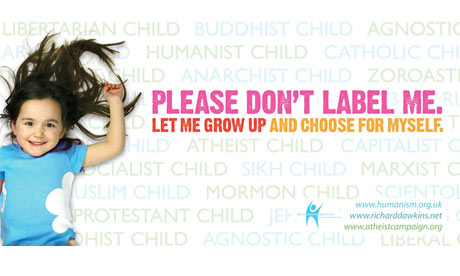 Yesterday, Ariane Sherine revealed the final phase of the atheist bus campaign with the new billboard. The campaign, scheduled to coincide with the Universal Children’s Day (Nov 20th), draws attention to Richard Dawkin’s point that some adults readily label children in terms of their religious background. The point of the campaign is to not label children at all, but rather allow them to come up with their own beliefs – and that includes atheism as well. Ariane says, “I hope this poster campaign will encourage the government, media and public to see children as individuals, free to make their own choices, and accord them the liberty and respect they deserve.”

I met Ariane in London last month at the Amazing Meeting where she really made me feel embarrassed. I went up and introduced myself to which she immediately replied, “Oh yes, I remember you, Bruce. You did the pervy thought for the day blog!” Well, she didn’t say ‘pervy’ but I felt so as I remembered making a double entendre comment on her picture I used in the post which has her posed in a rather seductive manner. Anyway, she is delightful – though she never signed my copy of her edited book, “The Atheists Guide to Christmas.” Oh well, I got an invite to the book launch in London so maybe I can make ammends then.