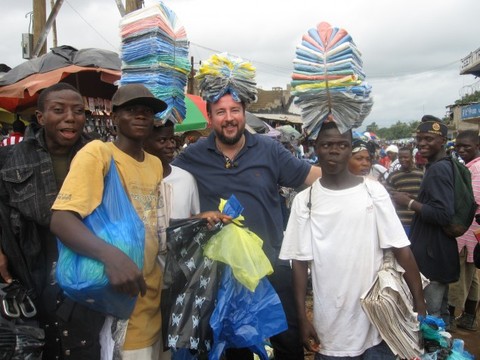 VBS TV's Shane Smith - Balls of steel or completely off his rocker?

Those crazy guys over at VBS TV have really gone too far this time. Shane Smith must be completely off his rocker to have taken a western camera crew into the worst slums of Liberia to interview warlords in the red light district, surrounded by hordes of cannibalistic, drugged-out murderers who would slit your throat for your camera…. and that’s the police.

We learn that the UN peace-keeping force is due to leave later this year and from what you can see, Liberia is a powder keg about to explode again. We even catch up with the notorious Colonel Butt-Naked that I blogged about earlier who is now a charismatic preacher who readily talks about his atrocities of killing tens of thousands of people and eating children alive.

It’s harrowing but utterly compelling. Watch this unbelievable documentary about the heaven and hell on earth that is Liberia. Haiti was a natural disaster – Liberia is one of our own making.

BTW FUBAR =  F**ked Up Beyond All Recognition

Filed under In the News, Television