Oxbridge and in particular its dramatic societies (most notably, Cambridge Footlights) have long been tarnished with accusations of dubious sexual activities. Last night I had my first cross-dressing experience. I had been giving a talk at the retirement celebration for my former Ph.D. advisors, Jan Atkinson and Ol Braddick hosted in Magdalen college. Naturally, being the hip trendy wannabe science communicator, I have long abandonned shirts and ties and prefer Italian jackets and simple black t-shirts. This was not a problem for the banquet that evening as the audience that attended the celebration were mostly vision scientists who are famously devoid of any fashion sense.

The  next day I stayed on in Magdalen to finally meet up with the wonderful Christine Legare and Harvey Whitehouse. I have been following Christine’s work and career for sometime and discovered she has just co-authored a big grant that will free her up from teaching at the University of Texas for three years – that is a rare feat in these lean economic days. She works on children’s rituals and imitation. With Harvey, they are planning an inter-disciplinary study of the development of ritual, the archaeological evidence for early ritual in Turkey and a whole bunch of other interesting stuff. So I was really eager to meet Harvey for the dinner that he had planned that evening. However, the problem was that we were to be dining in college again but not in the big banquet hall. Rather, I was a guest at the Fellows table in the cosy oak-lined dinner room reserved for only the really important people and Master of Magdalen. The first thing Harvey asked me on meeting with a slight frown was, “Did I have a shirt and tie?”

Clearly my very expensive John Varvatos designer jacket and exclusive “Evolution” black t-shirt of a human skull from the NY Soho store of the same name was not going to be acceptable. “No problem,” said Harvey – a man who seems not to be unnerved by problems, “You can borrow some of my clothes. I’ll cycle home and pick them up.” Ten minutes later, he was back with a suit, shirt and tie.

Normally, I would not agree to wearing another man’s clothing. I feel uncomfortable about it for all the reasons you know well that I have talked about throughout this blog. But as Harvey was well and truly still alive and not a sadistic killer from what I know, I soon settled. I am still not sure about that kipper tie though. I think he did that deliberately to upstage me…. though I did tease him about the lipstick and mascara I told him I found in his inside pocket! 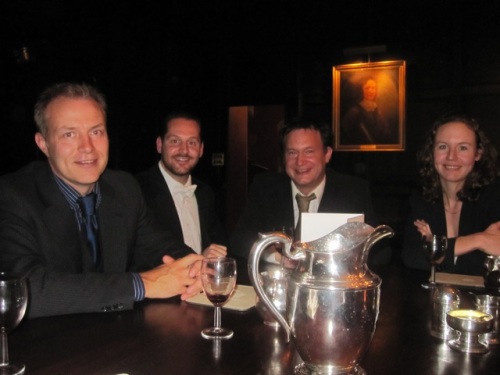 The Cost of Faking It

When Paul Bloom and I gave a presentation at SciFoo this summer, we talked about how essentialism influences the way that we feel about objects. Many of us (but not all I grant you) think that special objects are unique and irreplaceable because we attribute an inner “essence.” As regular readers of this blog will know, I have argued that rampant essentialism explains many strange and seemingly irrational human beliefs and behaviours. It explains why most of us value memorabilia from people we admire, and find ‘murderbilia’ – possessions of people we loathe, disgusting.

Essentialism is more than just association as I am always at pains to point out. We are more disgusted by holding a cookery book previously owned by Hitler than reading a biography about him detailing all his atrocities. Something about a personal possession triggers our emotional revulsion. 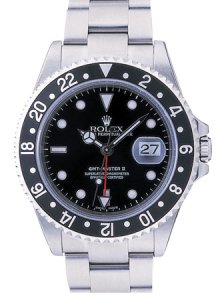 Is it worth paying for the original?

At Scifoo, Paul talked about his book, “How Pleasure Works” and the role of essentialism in our attitudes towards authentic things. The pleasure we derive from a Rolex, is the belief that it is genuine. Even if a counterfeit Rolex is indistinguishable from the genuine watch, we would not enjoy it as much despite the fact that everyone thinks we are loaded enough to buy such an expensive timepiece.

It turns out that the difference between authentic and counterfeit products is not only price – we feel and act differently when we wear fake items. Dan Ariely (author of Predictably Irrational) published an interesting paper in Psychological Science back in May this year – it takes me that long to catch up with the latest research – demonstrating that people who knowingly wear counterfeit sunglasses cheated more on a bunch of tasks, were more likely to think other people behaved dishonestly and generally felt like frauds themselves.

This is a really surprising paper as most people predict that wearing counterfeit items would not make someone think this way. So even if you buy a fake Rolex or Gucci sunglasses to improve your social standing and self-image, the reality is that you are going to feel worse about yourself if you did not buy the item in the first place. Look out for more illusions of the self in my current book I am working on.

Psychology is often dismissed as a limp science but I was pleasantly surprised by recent work in robotics that was described by my colleague Prof. Shoji Itakura at the BPS Developmental Psychology meeting earlier this week in London. Shoji is one of a number of Kyoto scientists working with robots and children. What made Shoji’s talk particularly interesting for me is that these guys are looking towards infant development to understand how we come to understand others as humans. One might assume that it is simply how human-like an android looks, but increasingly the research indicates that it is how much a synthetic behaves rather than looks which decides it for us. This is why the infancy research is so important because infants are naturally inclined to seek out social interaction from human-like things. For instance, if a robot glances at a child, the more likely the child is to copy and imitate the robot.

One of Shoji’s collaborators is Prof. Hiroshi Ishiguro, the “evil” scientist who has built a android version of himself called, Geminoid. You can see how spooky Geminoid in this video clip.

One of the reasons that we find Geminoid so disturbing is because of how close it appears to be human. This reflects the “uncanny valley” hypothesis articulated by roboticist, Masahiro Mori which states that we attribute more positive values to things that appear more human-like until a critical point is reached where it gets too close to being human. At this point, we experience revulsion.

This is a wonderfully powerful idea as I think it explains our tendency toward anthropomorphism and our subsequent revulsion of tailor’s dummies. This is a fascinating line of research and when I visit the labs next month, we hope to begin some research with children interacting with robots to see if they attribute minds to the robots. I am very excited. However, if you do look this stuff up on the web, it is sad to see how many commentators are thinking about sophisticated sex androids. Clearly these guys are interested in the other meaning of uncanny valleys. That’s technology for you.

I just had to post this item in time for the Pope’s visit to the UK tomorrow. I don’t get so upset by religion as many other atheists do, but then I guess I have always considered it such an obvious strawman when it comes to extremes of human belief – of course it’s made up. That said, I did guffaw when I heard that the British Advertising Standards Agency have just banned an  advert that depicts a pregnant nun spooning into a pot of  ice cream. The ASA said, “We considered the use of a nun pregnant through immaculate conception was likely to be seen as a distortion and mockery of the beliefs of Roman Catholics.” The funniest thing is that the company is the Italian ice cream producer, Antonio Federici, who had their last advert showing a nun and a priest flirting also banned. Apparently they have another of two priests about to share a kiss. According to a spokesperson, this campaign is meant to convey that “ice cream is our religion.” You simply must checkout their website – it’s hilarious.

If you have been following this blog then you will know that there are people who will pay good money to have their mortal remains turned into objects to leave behind. Some of these are useful like eco-friendly artificial reefs. Others are more personal, like the diamonds that can be created from cremated remains.

One enterprising UK company, andvinyl.com has gone for the yooof market – or at least those who appreciate vinyl records. For £3,000, you can have your ashes pressed into a vinyl record, as well as any last message or favorite tunes. With lots of gallows humour (something that I am quite partial to) you can choose suggestions from the “raveyard” or just leave the record blank so that loved ones can listen to your “pop and crackles” – the unique quality of vinyl that purists enthuse about.

For an extra £3,500, you can have you portrait painted by either James Hague (National Portrait Gallery) or Paul Insect (street artist) for a cover design. One wonders if they do death bed sittings, though the fact that they will mix your ashes into the paint does suggest that you should be dead first.

Still good luck to them. It all smacks of essentialism again – that core of human cognition that needs to keep contact with the material essence of others. It just wouldn’t work with a digital recording – that’s too artificial!

Filed under Essentialism, In the News

If you have ever had any doubts about what religion you should adopt, help is at hand from the Holy Taco site who produce handy flowcharts to help you make up you mind. I got this one from the delightful Cristine Legare who shared this with me as we giggled through one of the more dry talks at the excellent Religion Explained meeting held over the past couple of days in Bristol. 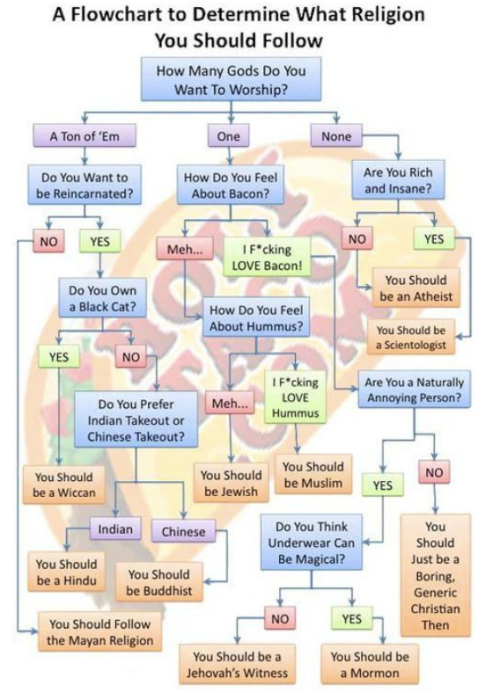 Which Religion Should You Adopt?