At least I look a lot younger than Bill Murray

I have a bit time before my talk today so I thought I would write a short blog. So far my visit has been really enjoyable and my host Shoji Itakura has been incredibly kind. My post-doc, Thalia and I were treated on our first night to a feast at an “izakaya” restaurant. Shoji and his graduate student Yazu were drinking whisky highballs, and convinced me that they did not give you any hangover. I decided to give them a try and of course, woke up the next day with a major hangover. Whiskey and me have never been the best of friends. There again, it is difficult to know if my spaced out feeling was due to whiskey, or the notorious jet lag that plays havoc with one’s sense of reality.

That distortion of reality was captured so accurately in “Lost in Translation,” Sofia Coppola’s brilliant portrayal about a middle aged actor past his best, doing a photo shoot to sell “Suntory” whisky in Tokyo. The movie title refers to both the cultural barriers but also the main character Bill Murray’s attempts to adjust to own mid-life crisis. Hence the movie’s tag line – “Everybody wants to be found.”

Japan is different to Western culture in so many ways. The language of course is very difficult, especially for someone like me who linguistically challenged. But it is more than just the language. Someone told me that Japan is like a cultural onion, with many layers of complexity, that Westerners do not appreciate.

The other thing I find very amusing about Japan are all the warning signs. The last time I was here with some dear friends, we giggled at how warning signs literally pictured dangers. For example, one of the funniest warned about smoking in the street because you could poke a small child in the eye with a lit cigarette. It had a small child clutching an eye that had just been jabbed with a cigarette. If anyone has that one, could they please post it here.

Ok not exactly as I remembered it but still funny. Thanks

"Heh kid, let me stub this one out on you" Thanks Sabio

However, being Lost in Translation can be a very isolating experience when you do not make the connection with everyone around you. I am not saying that I feel moribund, but one does wonder about the loneliness of travelers. So I was somewhat alarmed when I looked in the drawer of my miniature hotel room to discover a plastic bag with visual instructions. Of course, this bag is presumably for dry-cleaning but the images on the front suggest an all together different way of checking out.

UPDATE: See Kita’s comment below – it turns out that you ARE supposed to put the bag over your head as as a means of dealing with fumes from a fire! 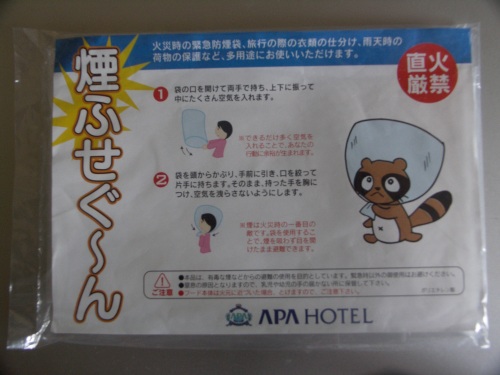