One Year On & What Has Happened to Jim McCormick?

It has been one year since the BBC Newsnight broadcast and the arrest of Jim McCormick on the grounds of fraud. Tonight the BBC plans to broadcast a follow-up to this story. As I write, I am under embargo not to post this in advance of the broadcast as it is not clear whether the Government will step in to prevent the BBC revealing two explosive discoveries in tonight’s broadcast. 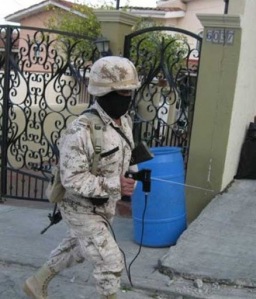 Mexican soldier using the ADE651 in the war against drugs

For those of you who don’t know, last year I assisted the BBC in their exposé of the woo bomb detectors that were nothing more than dowsing rods. They were being used at checkpoints in Iraq, and as a consequence, indirectly responsible for the wave of suicide bombings that claimed hundreds of lives. A police investigation was underway and the head of the British Company ATSC Ltd who I had been corresponding with through my blog was arrested on suspected fraud.

You might be asking why the case against Jim McCormick appears to have gone cold. It turns out that between 2001-2004, the UK Department for Trade and Industry not only knew all about ATSC Ltd and the ADE651, but had also assisted in the sale of these bogus devices to the Mexican Government. Oh dear, that’s pretty shameful. No wonder they don’t want this to come out in court.

The second alarming  discovery is that after the arrest of Jim McCormick, further sales of the ADE651 have continued. Apparently, the devices have even ended up in use in Afghanistan. The British Government’s attitude is that other countries are producing similar devices so it is not in their interest to prevent the sale to markets just so long as British civilians are not at risk. How cynical can you get? It’s a bloody disgrace in more ways than one.

You simply could not make this stuff up. The sheer audacity of these guys beggars belief. I must confess I have lost patience with the authorities. You can do as much jumping up and down, stamping your feet and screaming “It’s just a car ariel” and yet they do nothing to stop this outrageous business.

The government has today admitted that the army and UK civil servants helped market so-called bomb detectors, which didn’t work, around the world.

The export of the “magic wand” detectors to Iraq and Afghanistan was banned on January 27 2010 because of the threat they posed to British and allied troops, after a BBC Newsnight investigation showed that they were incapable of detecting explosives or anything else.  Now Newsnight has learned that they are still being sold around the globe.

At least four rival manufacturers have sold their own versions of these devices and they are now the subject of a major fraud investigation by the City of London police.  One of the makers, ATSC, sold thousands of the so-called detectors, which essentially consist of a radio aerial on a hinge attached to a plastic handle, to Iraq for $85 million.

It has been alleged that hundreds of Iraqis died in explosions in Baghdad after their ADE651 detectors failed to detect suicide bombers at checkpoints. ATSC’s boss Jim McCormick is currently on bail after being arrested on suspicion of fraud in connection with the so-called detectors.

The profit margins are enormous.  The manufacturer of another of the devices, the Alpha 6,  has admitted to Newsnight that they make them for £11 and then they are sold for £15,000 each to the end user.

The Government today told BBC Newsnight that between 2001 and 2005 a Royal Engineers sales team went around the world demonstrating the GT200, another of the “magic wand” detectors which has been banned for export to Iraq and Afghanistan, at arms fairs around the world even though the British Army did not consider them suitable for its own use. The Department of Trade and Industry as it then was helped two of the manufacturers sell their products in Mexico and the Philippines.

Newsnight has also found that the manufacturers are still trying to market so-called bomb detectors which don’t work. Just three months after the ban on sales to Iraq and Afghanistan a product called the HEDD1, consisting of a radio aerial on a handle made in Bulgaria, was displayed at a security exhibition at Olympia in London.

The makers claimed that while all the other products which looked like it were a “massive scam” theirs was different.  The HEDD1 was marketed by a retired British Army colonel, John Wyatt, who told prospective buyers that it had “proved extremely successful in several foreign countries” including in “double blind” tests.

In reality the maker of HEDD1, Yuri Markov, had been charged in the USA in 2008 for fraudulently claiming that the previous version of his so-called bomb detector could detect explosives. The US Navy had subjected it to a double-blind test and found it “does not work”.

Asked by Caroline Hawley why he had promoted such a product Colonel Wyatt said “I would never put lives at risk on this at all – its intangible science – I wouldn’t use it in a life or death situation”.  Nevertheless in July 2010 he demonstrated the HEDD1 to the Royal Engineers at an army base in Surrey as a potential bomb detector to be used in Afghanistan to deal with IEDs.

The Royal Engineers showed the HEDD1 to explosives expert Sidney Alford of Alford Technologies who has previously helped Newsnight expose other so-called detectors. The HEDD1 totally failed to find any explosives during a double blind trial and Mr Alford’s report concluded by saying “this equipment does not detect explosives”.

Colonel Wyatt told Newsnight he would have made 3,000 euros profit on every HEDD1 he sold but that he had not sold any so far and would not do so without further testing.  Asked by Caroline Wyatt whether he had given the product’s makers an air of respectability by becoming their agent he said “If you perhaps feel that they’re gaining an edge by my involvement I’d say probably yes I’m guilty”

After the Moscow bombing on Monday there will be questions about why the ban on exports to Iraq and Afghanistan has not been extended to protect the citizens of other countries.  The Department of Business, Industry and Skills told Newsnight that there was little point: “the impact of any further UK action in preventing the supply of these devices from the UK would be limited if they are available elsewhere” NEWSNIGHT 22.30 TONIGHT BBC2

Filed under In the News

28 responses to “One Year On & What Has Happened to Jim McCormick?”