The woo bomb detector story is hotting up as we learn that the Iraqi authorities have arrested Major General Jihad al-Jabiri,the man responsible for signing contracts with ATSC Ltd for the supply of the dowsing rod ADE651 in a £75 million scandal of corruption. Major General Jihad al-Jabiri was the jolly chap who rigorously defended the ADE651 when he and our old friend Jim McCormick, managing director of ATSC Ltd were called into account following several devastating suicide attacks in late 2009 which killed hundreds of Iraqis.

If you remember, he organized a press conference where he demonstrated the remarkable abilities of the ADE651 dowsing rod to point towards a grenade in full view. I repeated the demonstration with a coat hanger and an invisible grenade for the BBC. I have since got my hands on a real grenade (disarmed) and use it to show the ideomotor effect which is the principle behind all dowsing. 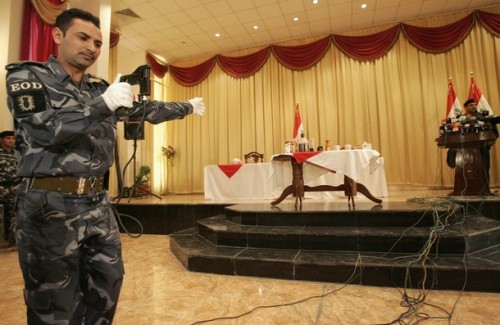 We learn that not content with placing his fellow countrymen at risk (and eventually the loss of over a thousand lives), Major General Jihad al-Jabiri sought fit to fleece as much as possible. Jabiri recommended that Iraq sign five contracts to supply security forces with the detectors for between £23,000 pounds and £35,000 each even though the real cost of the devices is no more than £60, and most of that went on the nice traveling case.

I would imagine that Jabiri, will have to grease as many palms as possible to get him out of this situation. Meanwhile we wait in anticipation to see the fate of those in the UK who so eagerly supplied these bogus devices – and that includes both the makers as well as the Department of Trade and Industry who recently defended their involvement in promoting the sale of the devices to the Mexican Government in one of the most shameful excuses to emerge – “if we didn’t make them, someone else would.” Let’s hope that decency and moral sense prevails. Thanks again to the tireless Techowiz in bringing this to our attention. Thank you also to diohuni who has just posted a comment on this.

Filed under In the News