One of the most common and yet peculiar superstitions in the UK is to salute a single magpie (Pica pica) to avoid bad luck. This is often accompanied by some form of salutation such as “Good Morning, Mr Magpie, where is your wife?” Magpies are monogamous and mate for life so a solitary bird has been considered a bad omen. The custom has also been traced to the myth that the bird was the only species not present at the crucifixion, lending to the belief that it is a cursed bird that brings bad luck. 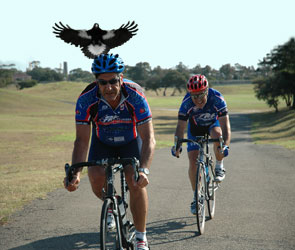 Certainly that seems to true if you happen to be riding a bike during the spring in Australia, where the local variety is noted for territorial aggression. Last Sunday, four-year-old Seth McInnes, out riding his bike in a Toowoomba park near Brisbane, Australia, was attacked by a magpie that pecked out his left eye leaving him blind in that eye and in excruciating pain. When I read this story, I was reminded of the shock scenes in Alfred Hitchcock’s “The Birds” where the birds peck out the eyes of various victims. Such swoopng attacks are not uncommon during the August/September mating season for the male Australian magpie which is a much bigger version of its European cousin. The article even has advice about how to avoid attacks and injury such as wearing broad brimmed hats and dark glasses. Apparently, magpies will not attack if you look at them directly and if you walk through a danger zone, draw eyes on the back of a hat or wear your sunglasses on the back of your head. I don’t think I would risk staring down a swooping aggressive magpie and prefer the shotgun tactic.

BTW, the Latin word for magpie, “pica” is also the term for the weird psychological disorder, where sufferers eat non-nutritive substances such as nails, glass, buttons, dirt etc. The origin for the word comes from the belief that magpies eat and collect almost anything and especially have an eye for shiny things.

Filed under In the News, Weird Story of the Week