Not Exactly the Drug Company I Had Expected

Over the past couple of years, I have done quite a few public speaking events as well as corporate engagements. When I received an invitation from Jay to speak at a “Science and Cocktails” in Copenhagen, I checked out the website and assumed on the basis of the sleek and stylish design that this was another corporate gig. Maybe a pharmaceutical company with a plethora of web designers, polished steel and glass sculptures. It also had the Niels Bohr endorsement.

I guess I should have reconsidered when I was asked if I wanted to stay at a house in the community of Christiania where the event was being held. I try to avoid, if I can, staying with hosts because a) it is good to have space and b) some hosts can be well-intentioned but fail to gauge what speakers need.  So I declined and accepted a room in a hotel in downtown Copenhagen much to my later regret.

If I had had the time and inclination then I should have checked out Christiania as I was confused by a place that seemed to exist inside Copenhagen. Even the email from my friend Susan Blackmore, telling me that I was going to have a great time did not twig in my overly occupied brain. I should say that from December, I have been teaching full time (when I was supposed to be on sabbatical), finishing the first draft of my new book (more about that later), submitting grants (I’ve let this slip with all the other commitments) and co-writing papers with my students and colleagues (sometimes you have to be very pushy here). Moreover, I had block-booked April for speaking engagements. I’m off to China and South Korea at the end of the week and I am hoping that I return un-nuked for a speaking engagement at the end of the month in Sweden.

Christiania established in 1971 on the site of a former military ammunitions site is a massive 84 acre site with around 1,000 hippies. Also known as “Freetown” it has its own TV station, garbage collection and other municipals.

There are three rules when entering Christiania, “Have fun. Don’t Run and Don’t Take Photographs.” The many cannabis dealers that line a dirt track through the middle of the campus known as “Pusher’s Road” are breaking the law and to be frank, are less hippie and more “pop a cap in your ass” types. Of course, just about everyone smokes pot in Christiania but the heavy dealers aspect of the set-up is less savory.

The Bath House Where I Was “Goosed” During the Midnight Sauna

Speaking of which, I ate some delicious vegetarian food when I was Christiania, some of the best I have tasted. I also arrived on a special day of the month when the Bath House stays open until midnight for mixed saunas. This is one for the bucket list. Fifty men and women (a record I am told) were squeezed into a sauna, while a shamanic “goose master” flavored the hot air with essential oils and gesticulations as he wafted the scented steam over the naked bodies. When I was told there would be a goose master, I wondered exactly what he would do. Apparently goose or something very close to it, means “misty” in Danish. 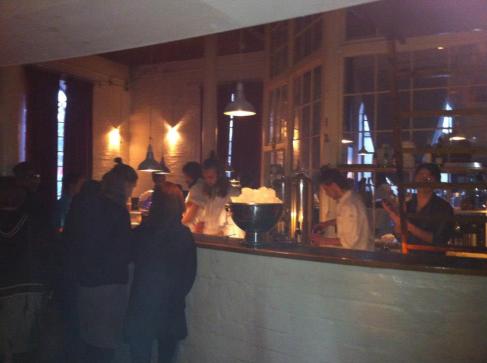 Anyway the next day, I had my gig to a packed audience of over 300 in the cinema which had a bar at the back. The cocktails very really excellent and the volunteers were a wonderful mixed bag. Rob & Costas made an amazing frozen cocktail sorbet using liquid nitrogen that was sublime. Unlike other meetings were the audience tends to be pretty partisan, this was a mixed bunch. The thing about Christiania it attracts all types. There is even a bar called “Woodstock” that seemed to be entirely populated with Inuit – a legacy of the time that Denmark ruled over Greenland.

Anyway, I had a great time and while I know that I am not really suited to this kind of lifestyle, part of me felt that there was more to life that slogging from one corporate gig to another. I look forward to being invited back one day.