After his hugely popular public lecture last night in Bristol, “Why Darwin Matters,” we spent the morning taking Michael Shermer around to see some local sights. First we had everything frozen off on the Clifton Suspension bridge. For a Californian, Michael seemed to have an unbelievable tolerance to the cold which put my Scottish upbringing to shame.

Then we went to visit the delightful but completely delusional Anthony Bush who is the founder of the Noah’s Ark Farm just outside of Bristol. For the past 10 years, Anthony has built a complete zoo on his 310 acre farm that is dedicated to promoting the

Creationist view. Interestingly, Anthony regarded American Creationists as “loonies” because they only believed the earth was 6,000 years old. In contrast, Anthony had constructed an elaborate but equally unscientific account of life on earth. Still he never raised his voice or lost his temper.

We wandered around in freezing cold as Michael and Anthony argued over every exhibit and animal. It was all very generous and kind but when I spotted the brass monkeys wandering around with welding sticks, I had had enough. Anthony may be a very warm and welcoming individual, but frankly hell seemed more enticing.

You can read more all Michael’s experience when he writes about his encounter with Anthony later. After the farm, I dropped Michael and the incredibly tolerant Andrew Kelly (we were both considering setting fire to the farm for warmth) down at the SS Great Britain, one of engineering’s wonders of the industrial era (that and the Clifton Bridge).

Unlike Noak’s Ark, the SS Great Britain is one vessel that definitely once sailed the seas.

UPDATE: This is for Poietes: Sorry I have become so UK-centric I forget that references are not always clear.. Here is the magnificant SS. Great Britain .. a boat made entirely of iron and as I am reliably informed by a Yank called, ‘Shermer’ the equivalent of a starship in today’s society. 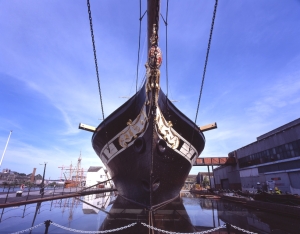